The Day OGD Locked Down LAGOS, As His Son OLUROTIMI Quits Bachelorhood 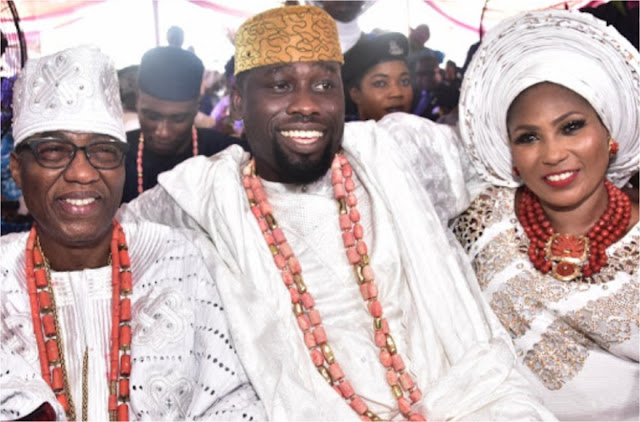 Days after the wedding, everybody is still talking about it.Some have called it the Mother of all weddings. Others have described it as The Wedding to beat.


This is because the wedding of Olurotimi, the 1st son of former Ogun governor, Otunba Gbenga Daniel was Grand & Classy.lt will be a Wedding to remember.


Over 100 first class Obas including Alake, Akarigbo, OSILE, Olu of ILARO, Dagberewe of IDOWA led 20 Obas from Ijebuland representing the AWUJALE to come and honour, the Obalofin of Ijebuland, a title once held by Sir Mobolaji Bank Anthony,


The AKARIGBO came with about 25 Obas to come and honour The Arole of Remo Kingdom, The Oba of LAGOS sent 12 white cap chiefs and 3 Oloris.


All the way from Ilesha came The Owa Obokun where OGD is the Asoju Oba of Ijeshaland.


From the east of the Niger was HRM Eze ILOMUANYA who led a powerful delegation to come and honour the Okosisi of Ubinugu.


The Sultan sent his emissary.


Intelligent report indicated that The President mandated the Hon Minister for Mines, Arc Olamilekan Adegbite to stand in for him although it’s not clear if he finally made it. The VP was unable to get there because of difficult weather conditions but was represented by his wife, Mrs Dolapo Osinbajo, who led a bevy of First Ladies past and present to grace the occasions.


They include the First Lady of Lagos, Mrs. Sanwoolu who was stuck in the traffic at the venue for over one hour. 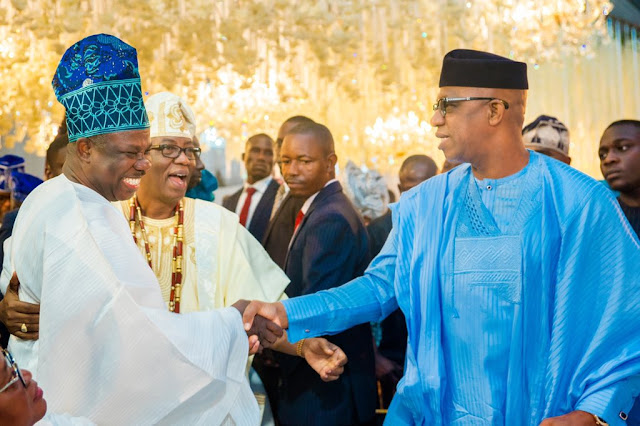 A shocking appearance to everyone was the sudden appearance of Sen Ibikunle Amosun who have been at loggerheads with Otunba Gbenga Daniel for about 15 years. Curiously OGD embraced and welcome him making him feel at home while getting him and the Governor of Ogun State to shake hands in the spirit, while Governor Emeritus Segun Osoba, who incidentally have become quite close to OGD was watching the development.


The VVIPs who graced the ocassion remain unprecedented. The wedding Service was conducted under the auspices of CAN, Christian Association of Nigeria where OGD is also the Asiwaju of Remo Christians, a position last held by the late sage Chief Obafemi Awolowo. Early arrivals were His Exc Chief Olusegun OBASANJO and his wife, and also Her Exc Margarette SHONEKAN, wife of the former Head of The Interim Government, Chief Earnest SHONEKAN, GCFR who later joined the Reception. Chief Olusegun OBASANJO GCFR signed the Marriage Register before departing the venue.


The list of VVIPs and VIPs appear in exhaustible. From Alj Rasaq OKOYA ELEGANZA Industries and his young wife who appear to have a special relationship with the DANIELS to Chief Samuel Adedoyin of fabled Doyin investments, ALIKO DANGOTE was represented, to strong women like HAJIA Sagaya, Abba FOLAWIYO, Sen FLORENCE ITA Giwa, Alhaja Onileere, Ireti ASEMOTA and all the Septuagenarians who bestrode the social arena over decades.


From BAUCHI state came Dr Tafawa Balewa (son of the first Prime Minister if Nigeria) with his wife.


To prevent any possible infection, all guests into the Event were properly sanitized by smart looking Ushers before admittance into the arena