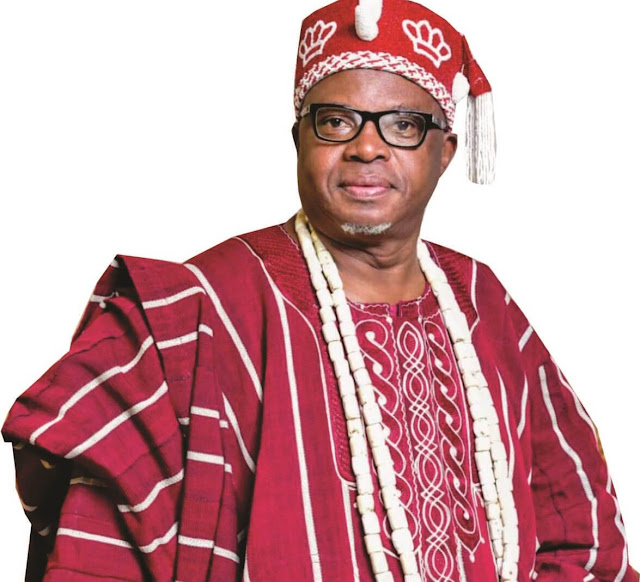 All roads led to Joga Orile in Ogun State on Friday, 21st of June, as stylish Ogun king, Oba Adeyemi Adekeye, the Abepa of Joga-Orile, buried his mum, late Chief Florence Adekeye, who is the Iya Oba of Joga-Orile. She died at 83. The 2-day event, played host to many Ogun Obas, top government officials, politicians of note and many friends of the Oba of Joga Orile who came to pay their last respect to Yeye Oba.

Not only did the party boost the economy and social activities of the town, it was also an event that would not be easily forgotten. Many couldn‘t stop talking about the late Iya Abiye of Ayetoro  who had made a lasting impact on many lives. City People’s Assistant Society Editor, ABIOLA ORISILE, was at the event to capture the moment. Below is her report.

POMP AND PAGENTRY MARK MAMA’S ARRIVAL IN CHURCH
There is no doubt that the Late Yeye Oba of Abepa-Joga Orile will surely be missed in Joga-Orile because of her kindness. That was one of the reasons many indigenes of the town shut their stalls to honour the late Iya Abiye. At few minutes past 1pm, many of them accompanied pall bearers who, danced with mama’s remains round the town. She was later taken to St Peter’s Anglican Church, Joga Orile for funeral thanksgiving service.
Though, the service was short, but RT Venerable M.A Oluwarohunbi, Ven Sola Ladipo Ajayi were among those  who led other men of God to the church. They all eulogised mama for being a woman of exemplananry character who lived by good example to other women in Joga Orile town. Many also describe Mama as a virtuous woman, right from her youthful days till she breathed her last. A close family member revealed that Mama gave without looking back. He also recalled  that recently, mama bought a special gift for all women in the church to make them happy. There was  nobody who asked for favour from mama and never given. Mama was a cheerful giver, he revealed.
At few minutes past 3pm, her remains were brought out of the church to leave for her son’s palace where she was later laid to eternal rest.

WHY KABIYESI COULDN’T BID  HIS MUM GOODBYE
Ask in Joga Orile Town, you would  be told that one man who is the closest to Mama Abiye among all her children is Abepa, Joga Orile. This is because “Iya Oba” lived With Him In The Palace And They were Always Together Whenever Kabiyesi was in town. Kabiyesis, also revealed to City People in an exclusive interview that he made sure he saw Iya Oba first thing in the morning to pay homage and chat with her and also saw her before going to bed. They didn’t just share a strong bond as son and mother, the Late Mama Florence was Oba’s closest friend. It was so painful that tradition didn’t allow kabiyesi pay his last respect as he couldn’t see Mama’s corpse or remains before she was buried to rest. But all this he made up for at the palace by providing a special place for mama to be laid. It was a special cemetery, well finished with white marble tiles. It was beautified to befit a  royal as the  Late Madam Florence Kikelomo Lokoluwa Aduke Adekeye.

MEET MAMA’S OTHER CHILDREN, WHO ARE ALSO VERY SUCCESSFUL
To say that the late Mama Florence Aduke Adekeye is blessed will be an understatement. Not only are all her children successful, they also share a very strong bond as siblings. They are all successful in their chosen careers and so are their children too. This was why all of them made sure their Mother got a befitting burial. Prince Abiodun Adekeye and Princess Adetoro were the ones who led their siblings to the burial.  Many of them also had, their special musicians who were  on the band stands throughout the ceremony.

KABIYESI LATE FATHER’S REMAIN WERE EXHUMED BESIDE HIS WIFE
Not only did the Late Mama Florence Adekeye’s remains were  laid to rest inside the palace, the late father of Kabiyesi whom was buried many years ago, was also exhumed and buried beside her darling wife, whom he spent  many years with before he breathed his last.

OLORI OLANIKE ADEKEYE STEALS SHOW@ BURIAL
If there was anybody who had no hiding  place at the burial, it was Olori Olanike, the youngest wife of Oba Adeyemi Adekeye, who flew in from United Kingdom. Looking stylish, she walked into the well decorated St Peter’s Anglican Church, Joga Orile in glamour of the chosen aso-ebi for “Mamas kids and their wives” which was transformed to suit her body shape. She later changed into a special Komole Iro and Buba, matched with unique 18carat gold set. One needed not be told that Olori Olanike love timeless jewellery. She dazzled in 2-set of 18carat gold. She also showed love to  her hubby during the reception.

AN ARRAY OF
OGUN OBAS
Let’s gist you about how loved Oba Joga Orile is among Ogun Kings. It was so evident at his Mother’s burial as many of them were not just early callers, but those who were absent sent their staff of office as early as 10am. They also spent many hours at  the reception. Among Obas sighted were: Oba Abdurasak Adenugba, Oba Alaye Ayetoro, Oba Iboro and Oba Owode-Egba.

MANY TOP  PERSONALITIES PRESENT THE EVENT
There is no doubt that Abepa Joga Orile is in the frontline of active and this was brought to fore at his mother’s burial. He is not just socially active, he is also well  connected. This was why many of his friends in the social scene made the event. Among many sighted were Tokunbo Fakoya, Peter Babafemi, Alhaji Sanoy Okesanjo and wife Monta, Senator Tolu Odebiyi and wife and many others

K1, EBENENZER
OBEY SUPPLY MUSIC
The King of Fuji music, king Wasiu Ayinde Marshal, was on the bandstand dishing out music to the  large crowd. He was an early caller because it was an afternoon party, so also was Juju Maestro, Evagelist Ebenezer Obey. He  was also one of Mama’s favourite musician like K1. they spent many hours at the event till it ended at few minutes past 10pm.