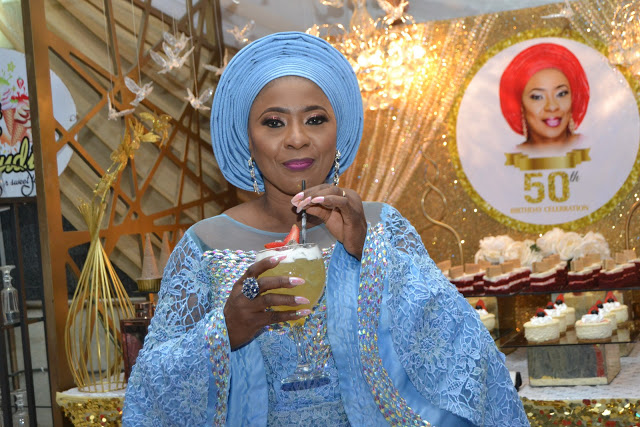 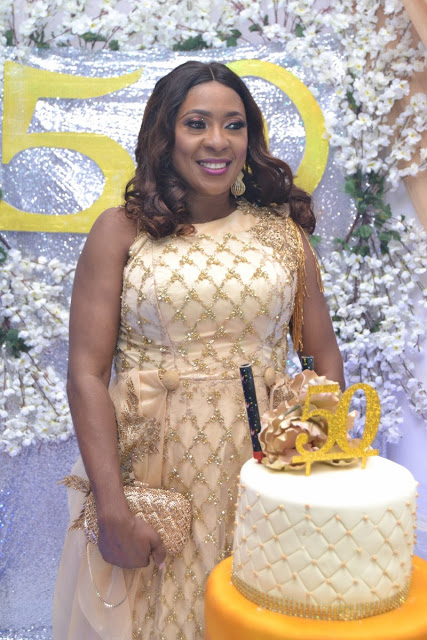 Golden Jubilee is a remarkable year worthy of celebration. It is also a point for reflection on how five decades has been spent.  One of the top public relations expert in Lagos, Mrs Aderonke Binuyo Adebule, gathered friends, family members, clients and colleagues to celebrate her 50th Birthday bash on the 9th Day of April, 2019 at the Rita Lori Event Center in Surulere, Lagos. It was filled to the brim with dignitaries who came to celebrate the rare gem, who turned 50. The hall and tables were decorated in white Gold. It was a thanksgiving service after which reception followed.

Lagos popular comedian, DIKAKA 1, was the master of ceremony and he did an excellent job by welcoming guests with some jokes on their fashion sense as they were ushered to their designated seats. Music is food to the soul and the saxophonist thrilled everyone present with harmonious sound from the saxophone. He gave the celebrator, her family members and friends a grand entrance as they danced in. Check out on  the celebrator revealed she looked fabulous in her exotic sky-blue lace, which was frilled with dazzling petals. Her husband, Mr Adebule, also made a fashion statement in a nude like Atiku fabric and he represented a typical Yoruba man in the Agbada style.  Her friends also represented in the colour code, which was pink. They were dressed in different shades of pink lace.The celebrator looked stunning as she danced in company of her husband friends and loved ones. She is a huge fan of Lara George and she danced to her song entitled Oba.
Gabriel Inyamah took the guest through another section of praises as he led them as a choire. Mr Aileru led the opening Prayer, while Evangelist Fred George and Evangelist James Bolorunduro George led section of prayers for the celebrator and family in English and Yoruba Language simultaneously.

Mrs Biodun Ajanaku, a music artiste and a close friend of the celebrator gave an appraisal of her friend and dedicated a song she wrote 10 years ago to her. She said that anyone who spends 5 decades or more on earth has enjoyed the mercies and grace of God, which should not be taken for granted. She moved to the celebrator table and joined her in dancing.
The celebrator’s second appearance was in a beautiful gold dress, which was decorated with petals and beaded fringe. She was looking like a 20-year-old damsel in the full length dress. Identifying the celebrator guests was easy because she looked gorgeous in her flowing dress.

DIKAKA 1 gave a comical relief as he cracked jokes. The Navigators band was the official band for the event and it is one band that people should watch out for this year. It is an all men band and they thrilled the guest with their choices of songs and sonorous voice. The Instrumentation was so on point that guests had no choice than to dance.

Shortly after the musical interlude came a video reel of goodwill message from the celebrator’s friends, family members and loved ones, who could not make it to the event. Banke Faleke and family(U.S.A) ,Olawale Ajagunbade,Funmi and Tayo Binuyo, Bolanle Osevbobo(Holland), Stella Osagiea(Canada), Dr Phil Osagie(canada), and Mrs Nike (U.S.A) who has been the celebrants friend for over 33 years spoke about their pleasing encounter with the Celebrator and her personality. One common thing they all said about the host is her generosity and commitment to her relationship with people.

The cutting of cake and photo session were handled by an anchor as family members, friends, Unilag Alumni, Afssosa, International Church of Christ members, Navigator band joined her for the Photo section. The  host went from table to table, making sure her guests were properly attended to and also used the medium to appreciate everyone present for their prayers, gifts, love, care, assistance and many more
The couple dance entertained the guests as the host and her husband held hands dancing. It was their moment and the Navigator Band made sure they enjoyed it. Friend and family members also joined on the dance floor as they sprayed crispy Naira Notes on the host.