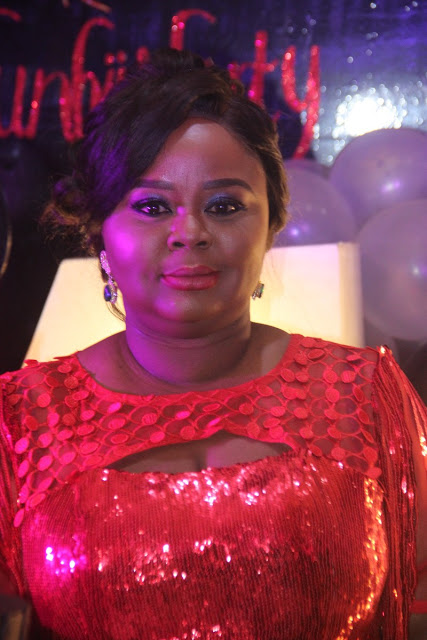 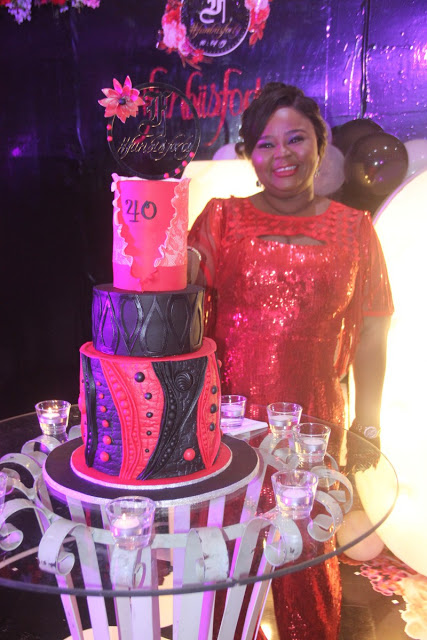 •Details Of Her Classy Birthday Bash
On Sunday, 14th April, 2019, one of the most sought after event planner in Lagos, Funbi Akinyosoye celebrated her 40th birthday in grand style. The event which paraded many distinguished personalities took place at Citiheight Hotel, Ikeja.
Funbi is known to be one of the best event planners in Lagos, so we didn’t expects anything less at her event. Should we talk about the decorations, it was one of it’s kind, and everything about the event speaks class.
The event started with prayer with and it was conducted by Pastor Akeem Okunade, immediately after the prayer, the celebrant danced in with her friends; she was beautifully dressed in a red sequence jumpsuit which show that she has a very good fashion taste, her hair was very organised and he beautiful set of jewelries depicts luxury. Her make up which sitted perfectly on her face was handle by her younger sister and she danced in with so much joy and happiness.
The entrance was handle by an amazing group of gospel singers and Saxophonist known as Praise Team and the delivered some hit gospel songs that left everybody dancing, all the guest couldn’t help but dance to their wonderful music.
After the entrance of the celebrant, the MC entertained with jokes and everyone laughed uncontrollable, Omobaba is indeed a very good MC to anchor event because there was never a dull moment at the event.
All her guests were elegantly styled as the dress code implies, her fellow colleagues that also plans event turn up in mass to support their beautiful friend who just turn 40.
The MC called on some set of people to talk about the celebrant, it was a day that brought back old memories. Mrs. Itunu was the first person to talk about the celebrant, according to her, Funbi is a very good friend, they met in UNILAG and also attended the same church in school.
She said Funbi became her Chief Bridesmaid controversially because it was late before she informed her but she didn’t disappoint her.
Funbi also did her wedding decor and she is always ready to support her when the need arise, another beautiful her friend said is that, Funbi is very religious and she has inspired her a lot. Despite the fact that they no longer see each other often, she still stay in touch.
Her pretty daughter who wore a two pieces white and blue jacket and trouser also took her time to recite a peom for mum. Afterwards, the celebrant younger sisters Opeoluwa Odunmbaku and Abimbola Odunmbaku went on stage to talk about the elder sister. Her sister emphasised on how she has help them achieve their desired goal and dreams.
Shortly after that, her close friend Ngozi, also spoke about how they started there friendship two decades ago while she was talking, Ngozi and Funbi became very emotional as she said all teh beautiful moment they shared; she said Funbi is more than a friend because she has played a sister role in her life.
Her Aunt, Yewande Okundare also spoke on how she always support everybody who needed her help. Oluwakemi Adeyemi called Funbi a warrior while she was giving her speech. She said Funbi as been through a lot but she remains strong.
Popular Lagos Alaga, Iyawolangbe also said her own testimony of how Funbi supported her morally, financially, spiritual from her childhood. She refer to her as a mother because she stood by her when she had nobody.
Another great personality, Funke Buknor also said beautiful things about the celebrant, almost everybody at the event want to say something about the celebrant and how she has been a good sister, friend, colleagues to them.
Cutting of the cake was conducted by her family members friends, colleagues and well wishers.
They had another prayer session for the celebrant and everyone went on the stage to dance with the celebrant. 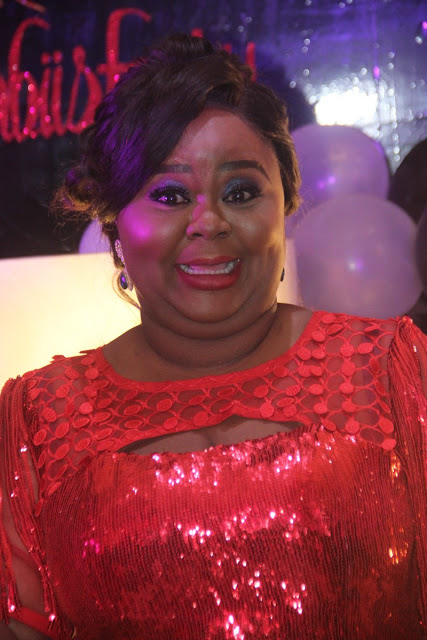