How 10 Event Venues In LAGOS Raked In Millions In 2018 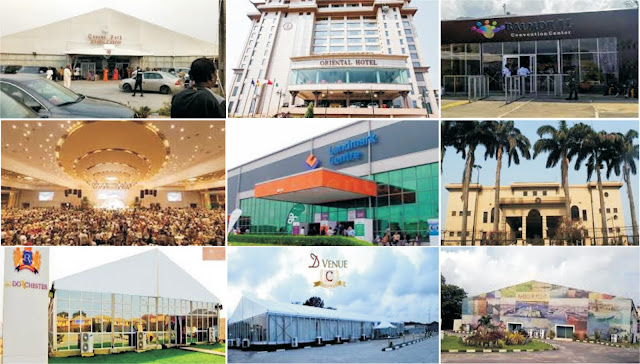 •As The Super Rich Made Use For Their Venues For Parties

The last 12 months have witnessed many parties in Lagos and the memories of the classy shindigs could not be easily forgotten in a hurry. The year was dotted by celebration of life in many colours: Birthdays, weddings, coronations and burials. The ceremonies attracted guests from all walks of life. Many guests wished the events could   take place over again. In 2018,  major events were held on the Islands at some of the most prestigious event  Centers that have literally become a cash cow for the major players in the event center business Those parties showed affluence, class and status and they were the major reasons the parties took place on the Islands, most especially weddings. The super-rich did not leave any stone unturned as the event centers played hosts to all THE celebrity parties.


Event centers that are located on Victoria Island, Lagos Island and Lekki Peninsula are the major beneficiaries.  The parties were stormed by the high class people in the society. They were a gathering of captains of industries, Oil Barons and Political bigwigs. No weekend pased without superlative parties taking place on the Islands. It was just a back-to-back affair as the Islands  bubbled with one ceremony or the other. Give it to Nigerian women, they did not disappoint in the style sector with their aso-ebis. They made those parties colourful. It was a party year that went beyond the ordinary in the area of style, as latest trends in colours, attire, decor and lots more were on display.

On the list is Eko Convention Centre at Eko Hotel and Suites. This is the biggest and the most expensive event center on the Island. To hold your party at Eko Hotel, using the full facility, you will pay nothing less than 12 million naira, excluding food and drinks. You will not be allowed to bring in your caterer, but all food and drinks will solely be supplied by the Eko Hotel. This is no small money.

No wonder, only the super-rich could afford to hold their events in the Full Hall. The hall, which is circlar-shaped 360degree, could be split  into 5, depending on the number of guests a client invities. It is the largest in Nigeria. It has a dinner area that can seat 5,000 people at once, the same number for its conference event and it also has a space sufficient to house 270 exhibition stands. If the event is a concert, it has audience space for 6,000- 7,000 people. That’s the same number  some mini-stadia could accommodate.

The hall comes with a professionally-built and strategically- placed lighting system, in-built sound system and a roll away stage with carpeting to enhance sound effects. Some top celebrities who have used the venue in 2018 for their parties were: Gen TY Danjuma. He celebrated his 80th birthday in grand style and the whole venue was used. What about Pastor Siju Iluyomade, the founder of Arise Women Foundation,  she held her annual Handsmaiden women in leadership conference at Eko Hotel.

The grand 80th birthday of Chief Michael Adeojo, the chairman of Elizade Toyota Motors, was also held at Eko Hotel. The Ex -MD of First Bank, Bisi Onasanya daughter’s wedding was held at Eko Hotel. The richest man in Africa, Aliko Dangote also gave out his daughter’s hands in marriage in Kano. It was  followed with a classy reception at Eko Hotel. The annual COWLSO event organised by Lagos State’s First Lady, Bolanle Ambode, also held at same venue. Some other parties which took place there were: Shuga Band 20 concert, Pastor Kunle Ajayi 30years on stage, BJSax music concert, AY Live Show, Olamide in concert 5, and many more.

Another event centre, which was a centre of attraction for celebrities in 2018 is Balmoral Convention centre, located inside Federal Palace Hotel, Victoria Island. We can conveniently say that Balmoral was the busiest event center for 2018. All weekends were booked back-to- back for events. It staged the most colourful weddings of 2018.

The parties that held at the event centre were the wedding of ex -governor of Cross River state, Donald Duke's daughter, Ambassador Folake Marcus Bello son’s wedding, The 70th classy birthday of Prince Adesuyi Haastrup, Alhaji Umar Saro daughter’s wedding and many more.  Queenspark Hall is a Marquee and it is located at an easily accessible location on Victoria Island and could conveniently seat  1,500 guests when arranged for Banquet purpose and 2,100 guests when it is to be used as a theatre hall. You need not worry about where to change your dress if need be. There’s a well-kept changing room at your service. This event Centre recorded many event held there in 2018. Among them was Akinsiku of Lagos, Oba Dosunmu father’s burial and lots more. To use this venue, you will  cough over 2million naira.

The venue is another classy Marquee that could conveniently seat 1,000 guests for Banquet and 2,000 audience for Theater event. Located in a serene environment, be sure your guests would enjoy being at this Marquee.  From the ample parking space to the security that ensures safety of your guests and their property, it is a place to be.  It is an event centre, which played host to many events in 2018. Some of them were:  Lagos society Woman, Lara Akinsanya niece’s wedding, Protea Hotel'S Boss, Alhaji Owoyemi daughter’s Traditional wedding,Aviation topshot, Adeola Yesufu’s 70th birthday and many more. The hall charges over 2million naira per an event.

Harbor point is a suitable spot for all types of events and many events were held there last year. It is a large and fully- air-conditioned hall with a projector system to help put on  display pictures, beautiful memories, programmes, teachings and it is  also used  for stage presentation of any sort. W

ith a spacious car park for over 500 cars, Corporate Guards, 6 Serving Points for Providers, the hall can seat up to 1000 guests and there are tables and chairs that can be positioned to suit patron’s style. It was another event centre, which was fully booked in 2018. It played host to the wedding of Lagos celeb woman, Barr. Shade Balogun’s Niece , Sifax Boss, Taiwo Afolabi  son’s wedding and others.

For Oriental Hotel, everything about it speaks class. For its concert event, it has a theatre sitting space for about 2,000 persons and grand ballroom for banquet for about 1,200 persons. Situated along Lekki-Epe Express Way, it’s one of the most patronised event halls in Lagos. To hold an event at the event centre, you have to budget like N5,000,000. It is strictly for the super rich. Many events were held there in 2018.
Just as the name implies, Landmark Event Centre is a major landmark edifice  in the heart of Victoria Island. Sitting on a 40,000 square metres of land, the event Centre is not just  for any one. It has a capacity of 2,000 for its theatre seating and 1,600 for banquet.

The fully air-conditioned event Centre has its private beach – talk about class, it has a parking space for 1,000 cars and its strategic site  makes it one of the hot cakes for patronage. Situated at Plot 2&3, Water Corporation road, Victoria Island, Using Landmark Event Centre would see you cough over N5,000,000, that is why the rich rush  to the venue to hold their events. The wealthy Nigerians, who used the place last year included Queen of Diamond and Lagos society woman, Hajia Bola Shagaya, The chairman of Marriot Hotels, Chief Salaudeen Owoyemi and others.

Dorchester Event Centre is situated on Water Corporation road, off LigaliAyorinde, on Victoria Island. It offers a theatre-style sitting space for 4,000 persons and 1,500 for banquet arrangement. It has a fully functional Air Conditioning system, ample parking space, standby generator and other facilities that make an event Centre pleasurable. To use Dorchester Event Centre costs only N2,760,000. It is one Centre, which is used by many celebrities. Muson Centre at Onikan, Lagos Island also played   host  to major events in 2018, owing to the class it belongs It is one of the best venues for hosting private events in the city.

The traditional venue is marked by its excellent facilities. It goes for N1.5million, for the Shell Hall, while the garden goes for 1 million naira. For a weekday event, you will part with 1.1million naira. The venue was used for Engr. Bayo Phillips' 70th birthday, Prince Bisi Olatilo’s 65th birthday and others. What about City Hall in the heart of Lagos Island? The true sons and daughters of Lagos mostly use the venue for their events. There are also important personalities who held their parties there in 2018.