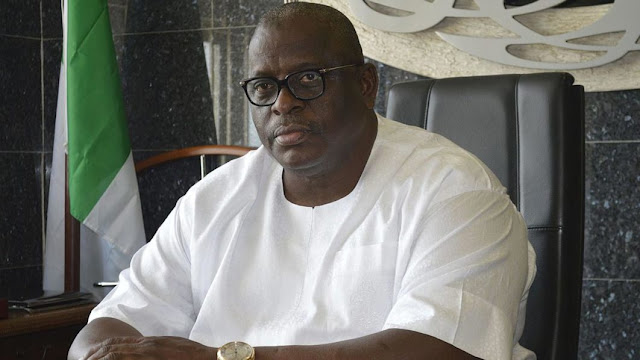 I write with reference to the statement credited to the National Chairman of the Peoples Democratic Party (PDP), Prince Uche Secondus with regards to the nomination forms wherein he made some criminal imputations, describing me as an agent of the All Progressives Congress (APC). I am nobody’s agent. Like Secondus, I am only fighting for my rights and the rights of my teeming supporters in the PDP.


My initial reaction was to ignore the statement as an outburst made in a fit of momentary anger. However, following enquiries made by our supporters and friends across political divides, I have decided to respond as follows:

As the National Chairman of an opposition and pan-Nigeria political party, Prince Secondus is supposed to be a leader and the alter ego of the PDP. Thus, there is a presupposition that he would project the best that PDP represents. It is not for him to continue carry on as a serial contemnor through consistent disobedience of subsisting court judgments under the guise of party supremacy. He cannot continue to act as if the party is not guided by its own constitution and the Constitution of the Federal Republic of Nigeria.

It is surprising that while the leaders and elders of the party as well as its presidential candidate who believe in the Rule of Law have advised the national leadership of our party to toe the path of honour, Secondus and his co-travellers decided to go the inglorious way of impunity and disregard for constituted authorities – in a desperate bid to accomplish the mercenary job they have been paid to do.

By their conduct, they are telling Nigerians and members of the PDP that the Party belongs to them and they can do whatever pleases them. They are saying they are the Alpha and Omega of the Party; and that they are more powerful than the Constitution of the Federal Republic of Nigeria. They have always done this to people. But, I want to make it abundantly clear that, on behalf of all the cheated and oppressed members of the party, we will fight for our rights till the last.

I urge the judiciary, the legislature and the executive arms of government to take cognizance of the happenings in the PDP as they relate to the Ogun State PDP issue. It is not about me or my supporters. It is about our democracy and respect for the Rule of Law which are being endangered by the activities of Secondus and his ilk.

Our respectable and well-meaning leaders and elders must also rise up to the occasion and deal with these gangsters who do not believe in the Rule of Law but the rule of might and money. I am referring to Secondus, Elder Yomi Akinhonmi, Kola Ologbodiyan and Emmanuel Enoidem. More than anyone else, they are the ones bring the party into disrepute by their actions. Truly, I am not bigger than the party, just as Secondus is not bigger than the law. Even the Party is not bigger than the law. But, I know my rights and will always fight for my rights. Secondus and his co-travellers cannot be protecting their own legacies and be destroying other people’s legacies.

He said somebody printed forms, sold the forms and screened himself, describing such actions as criminal. While not holding brief for the State PDP, I am aware that the PDP is one.

Let me also add that there is nowhere in our Party’s Constitution or the Electoral Act where the collection of Nomination Forms from the national headquarters of a political party is made a condition precedent to validating a candidate’s nomination. All you are required to do is to signify interest, hold congresses at designated centres and forward the name of the candidates with the highest number of votes to the electoral body. It is the Independent National Electoral Commission (INEC) that issues the nomination forms that is known to law. Any other form by the party is for administrative convenience. It is NOT statutory.

Section 25 (1) of the PDP Constitution (as amended in 2017) states, “There shall be a State Party Congress which shall consist of:

(a)The State Chairman who shall be the Chairman.

Section 25 (2c) states further, “The functions of the State Congress shall be to: (c) Elect governorship candidates of the Party.”

There is a subsisting court judgment that has resolved the issue of who is the State Chairman of the PDP in Ogun State and restrained the Party from removing him until he serves out his four year tenure as guaranteed by our Party’s Constitution. It was the State Chairman recognized by law and the teeming members of our Party in Ogun State that presided over the State Congress where the governorship candidate was elected. The other group has no legitimacy of any sort than to claim national leadership’s backing as if the power of the national leadership of the party is absolute.

Mr. Chairman, there is no way you can confer legitimacy on the illegal Sikirulai Ogundele group or anything it does, including the purported primaries, which were held in utter disregard of subsisting court judgments and orders. Nothing could be more criminal that defying the judiciary. That is why it baffles me now that you are going round courts to secretly and fraudulently obtain orders from courts even when they do not have jurisdiction to deal with pre-election matters. In the last few weeks, you and your minions have filed four suits at the Federal High Court and FCT High Court – FHC/ABJ/CS/1323/2018; FCT/FT/CV/28/18; FCT/FT/CV/29/18 and FCT/FT/CV/30/18.

You have refused to join us as relevant parties knowing full well that we had joined issues in different courts on the same issues. We are at the Federal High Court, Abeokuta; the Court of Appeal, Ibadan and the Supreme Court which recently struck out, with cost, your application for stay of execution of the judgment in our favour. It is incongruous and duplicitous of you, Mr. Chairman to seek judicial cover for your contemptuous acts. Your calling me names won’t help you.

By your conduct, you have consistently shown utter disdain and disrespect for the judiciary – in a manner that suggests that you are above the law. Otherwise, why is it difficult for you to obey the courts’ pronouncements until a superior court says otherwise?