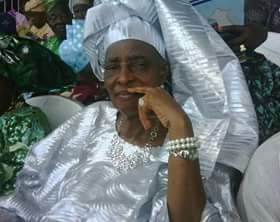 True, a lioness she was - homemaker, protective mother, bold, strong, conquering, yet gentle with her cubs and very pretty and confident in her gait. The above universal superlatives, and more, about lionesses, fitted Alhaja (High Chief)Aminat Abiodun, the Iyalode of Ibadanland, who joined her valiant ancestors today, Saturday,8th December 2018. May Allah (SWT)grant her noble soul Aljannah Firdaus. Amen.

To capture the just-departed Iyalode Amina, I recommend that my reader please listen to her eulogy as rendered by the late king of Apala music, Haruna Isola, in his a song,"AMINAT ABIODUN - OLUWA LO F'ORI S'OGA ARA" in one of his many golden LPs.Ditto the late king of Awurebe music, Dauda Akanmu Epo Akara and the late king of Dadakuada music, Odolaye Aremu,, in their respective albums dedicated to Iyalode Aminat Abiodun.It will,also, not be out of tune to read my tribute to one of her predecessors,the late Iyalode Humuani Alade,titled,"IYALODES ARE MADE OF THESE", published in the Sunday Tribune newspaper issue of Sunday,28th August,1994.

Iyalode Aminat was a loving and generous mother to her children,and million non-biological others like my humble self. Once she liked you, you became her child. You would hear her greet(her male proteges) familiarly thus: "Nle, omo rere, iyawo ati awon omo mi nko? (Hello, well bred, how is my wife and your children?)And to anyone who dared her, or drew her ire, hell hath no fury. The first signal of war from her was her well-known quip,"IWO ATI AWON TAANI? NIBO LO TI WA T'O L'OKUN L'ORUN"(You and who? Where were you loosened from?).

I escort the late Iyalode Aminat Abiodun to her seat at the fundraising of the new Olubadan Palace, at the Lekan Salami SportsComplex, Adamasingba, Ibadan,Oyo State of Nigeria in 2010. On the left is Chief 'Bola Doherty,Director of Bola Immaculate Group of Schools, Ibadan
on December 08, 2018