•Tells City People About His 55 Years As A Photographer 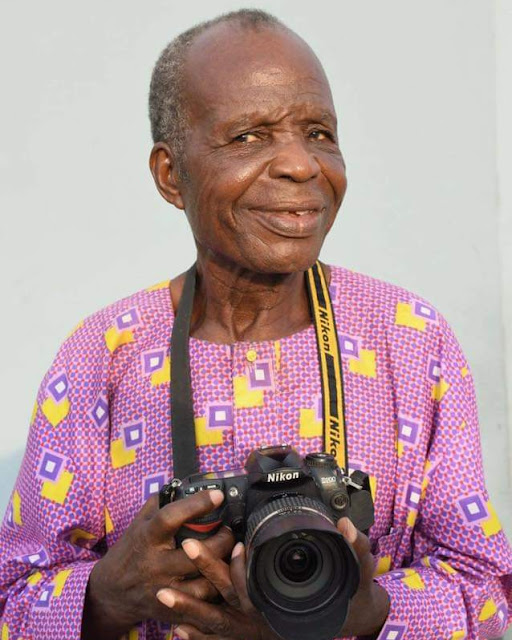 The news of ace photographer, Cornelius Oyemade turning 80 a few weeks back came to many as a pleasant surprise. Not many people knew that this veteran society photographer was that far gone in age. This is because he has always been rocking the social scene for years with his cameras, looking young in his shirt and jeans. But the big news is that Baba Cornelius, as he is fondly called, marked his 80th birthday in November. This is big news. If you are a society lady or man in your 60s, 70s and 80s there is no way you would not have encountered this popular photographer, who has been rocking the party scene for decades. He has been a constant star at parties and social functions. He is always there with his expensive cameras, clicking away. So experienced is he that he has taken the photos of practically all the society women in their 50s, 60s, 70s, 80s and even 90s.

But Baba Corne is not only about society photography. He is into Sports Photography and Media Photography. He has lived all his life as a freelancer. He has freelanced for all the big newspaper titles in Nigeria, like Daily Times, Punch, Tribune, and others. Over the decades, he has covered many major tournaments and sports fiestas across the world.

All his life he has been a photographer. He didn’t just stumble on photography, he chose to be a professional photographer and he went for training abroad. He was trained by the masters at the major photography schools. One of them is London Film School at 24 Chelton Street, WC2. The other is NIKON School.

On Saturday, 10th November 2018 when he turned 80, Cornelius Oyemade woke up a happy man because he made it to 80. Many of his age mates and contemporaries have not been that lucky. Some of them are no more. And those who are still alive have aged. He still looks sharp, vibrant and strong. He has not aged one bit. He is still smart, wears shirts.

All he did to mark his birthday was to go to the popular Cathedral Church of Christ in Lagos for Thanksgiving. He didn’t throw any party, because his house where he lives at Bariga, Lagos collapsed a few months back. It is still under reconstruction. So, that made him to cancel any form of a party. But he has lived an accomplished life as a professional. He bought his 1st camera in 1956 an Alfa Camera at 3 pounds 10.

Many don’t know he is from Ijebu-Ife but was born at Campus Square area of Lagos. He holds the late Super photographer Peter Obe in high esteem. So, also the ace photographer, Mr Sunmi Smart Cole, the late Kayode Ibidapo of the National Sports Council and the late celebrity photographer Jackie Philips.

He respects Peter Obe so much because Peter Obe took his time to train him. Peter Obe used to lecture him every Saturday in those good old days when men were still boys.

He also spoke highly of Sunmi Smart-Cole who Cornelius Oyemade described as one of the best photographers in the world. He admires Sunmi Smart Cole’s habit of updating his equipment. “He does not use one camera for more than 2 years before replacing it”, he revealed. “He is also a product of NIKON School of Photography. You will use their camera and they will also train you.”

He takes his craft seriously. Sunmi Smart-Cole has a rich collection of vintage cameras whose worth is enough to build a bungalow, he told City People. He is the best-dressed photographer,” he said.

He also moves with a high calibre set of people”. He added late Kayode Ibidapo to the list. Kayode Ibidapo was also a product of NIKON School. And then, Jackie Philips, the late celebrity photographer. “He was my Oga. Jackie Philips taught me all I know in photography. He taught me the rudiments. He was my 1st boss. He died about 3 years ago. I used to follow him. I used to carry his bag for him to Onikan Stadium as an Assistant Cameraman. I used to help him load films”.

His advice to upcoming photographers is for them to take the craft of Photography serious. “New photographers should go for training abroad he advised. “They should try and go for 3 events -  Olympics, Word Cup and Wimbledon tournaments. They will learn a lot. When they are coming back, they will bring back the latest cameras to enable them meet up with world standards. They should learn from these Oyinbos abroad. There is a lot to learn. They are far ahead of us. They will train them in what Newspaper Editors want globally. Editors need action photographs.

Cornelius Oyemade is not only an ace society photographer like Sunmi Smart-Cole, he is also a Media Photographer (a newspaper man). Before he slowed down, he used to freelance for so many weekend newspapers. So he will distribute his collections round and he is sure to make the front page of at least 2 Sunday newspapers with exclusive Sports or Society photos.

There is hardly any major wedding that will take place and he won’t be there.

Though, age has mellowed Papa Cornelius Oyemade a bit, he is still full of life. He still bubbles. He is still the encyclopedia of Lagos society parties that he has always been. His power of recall is sharp and acute. He knows everybody in the Lagos social establishment. He knows 2 generations of all the popular celebrity families. He knows fathers, & mothers, sons and daughters, even cousins and nieces. Many elders in their 80s call him by his first name.

For a few hours last week, the grand old man of photography told City People Publisher, SEYE KEHINDE, the story of his life @ 80. Below are excerpts.

Not so much. I went to church in the morning. I attend The Cathedral Church of Christ. We prayed and sang. I could not celebrate because my house collapsed on June 16 at Bariga there. The developers are trying to reconstruct it. I don’t have money to celebrate anything.

When you woke up that morning, what went through your mind?

I had to thank God that despite all the ups and down, I am still alive. I prayed for all the celebrity women, who have supported my career. They are so many, I don’t know where to start from. Also, all the big men, who have dominated the Lagos social scene. So many of them, retired judges, top civil servants, who have retired now, retired public service top shots, politicians, the clergy and their wives. They are many.

Some of the socialites, really big names. If I start now I will reel out over 200 names of all the who-is-who in the Lagos social establishment.

You have been into photography for how many years?

I have been into photography for 55 years. It’s been long. I started from school, Baptist Academy in Lagos. I stole N2,000 from my mother. So, I went to the camera shop and I bought a camera to start using. All along I have been making money from school by taking photos and from one camera, I bought another one. I bought 3 to 4. One day, my mother got angry. She said I sent you to school to study, you are taking photos. You are buying cameras. Why? What nonesense? She packed all the cameras to Baptist Academy to report to the principal, Dr. Adegbite. He asked her, now, how many cameras have you seized so far?. She said 4. He said you had better return them to him. Maybe that is what he is going to live on.

Could you believe that when I went to Constantine, in Algeria to cover a friendly match, the late Chief M.K.O. Abiola, chartered a plane. On my way back home, I saw the same Dr. Adegbite. He now told me his daughter was getting married that Saturday. That’s how life is. I went to cover the wedding. Had it been that he didn’t support me then, where would I be today? I had to thank my God.

How do you feel sir that you have built yourself into a big brand that everyone knows?

It’s by the grace of God and through the help of the media, all the newspapers that used to publish my photographs. It’s a lot of hard work. It is not easy getting to hear of events. It is even difficult to get invited. What I used to do is this. I will go early in the morning to the Cathedral Church. I will go and stand in front of the church because all the papers I used to freelance for need frontpage photos. I used to freelance for all the major newspapers including City People.  So, at 7.30am mass, I will be taking the photos of all the celebrities who come for mass, while others are still sleeping. So, Sunday Times, Lagos Weekend, Punch, all need different photos of different celebrities. I will make sure I didn’t give them similar photos.

The one I give Sunday Tribune would be different from Sunday Times. The most dangerous photo I took in my life was when the late Premier, Chief Samuel Ladoke Akintola died at Iyanganku in Ibadan. It was a big risk I took. I got friendly with the soldiers and without telling them I took the photo of the scene where he was murdered. It was on the front page of West African Pilot.

When you finished at Baptist Academy, what happened next?

A lot. The Queen visited Nigeria. I took photos at the Race Course from there I developed a great interest in Photography. That was how I took it as a profession. I became a freelance Photographer for all the newspapers. I told many of those who took interest in my career that I don’t want Studio photography. What I wanted was Press Photography that would enable me to go and cover world events like the Olympic Games, Athletics. These are specialised areas of photography. Not every photographer can take this kind of photography because they don’t have the perfect instruments like Camera and films, like 1600 Afa Fuji, which are not used during the day. It is used in the night. It takes special mastery to be able to take 100 yards race or relay.

How can you capture or arrest the speed of 100 metres? You need a special film. You need super experience. Our press photographers in Punch, Tribune, The Sun, The Nation, Vanguard and others are trying a lot. But some need adequate training. They should be sending them for 3 months training at NIKON School in New York or London. They should arrange for them to go and cover Olympic games when it is time for it.