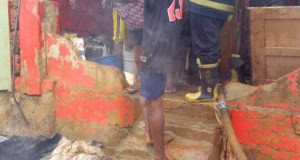 A Zimbabwean man, Manjese Tizai has been remanded in court over allegations that he set the home of his neighbour on fire over an argument involving bananas. Tizai appeared in court on a charge of arson. He was accused of torching his neighbour’s house following an argument over bananas.Tizai, who is 49, is from Mukosho Village in Odzi in Zimbabwe.Prosecutor Fletcher Karombe told the court presided over by Magistrate Lazarus Murendo that on April 18, Tizai stormed complainant Kufainyore Mushukuto’s house at night shouting obscenities, accusing him of stealing his banana crop.The accused allegedly picked a burning log from the fireplace and set alight complainant’s grass-thatched bedroom, destroying property worth over $2 000 (N720,000).
on May 02, 2018